While winter may have come too soon to get Northern Cross sailing again, La Forza was safely south and luckily in need of crew for a delivery to the Caribbean. The passage from Fort Lauderdale, Florida to Sint Maarten, Netherland Antilles was to be about 1200 nautical miles and would take between six and ten days depending on the weather. The crew would consist of Captain Nicolas, Mate Santiago, and three scoundrel crew: Gary, Wes, and myself.

La Forza del Destino in shipshape and Bristol fashion for many blue water miles ahead. 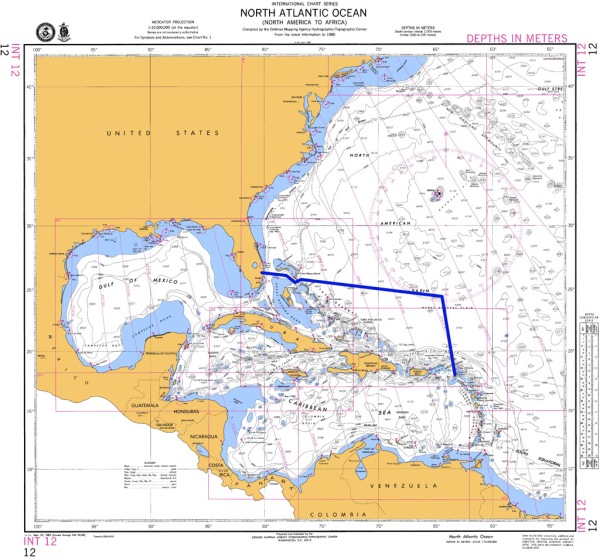 Nicolas dressed for a rain squall.

Rare shot of Gary not 50' in the air during some kite surfing stunt.

Yours truly with Ting, the best soda in the world.

After several days of preparation including engine maintenance, navigational planning, food provisioning, rigging adjustment and bar hopping, both the boat and crew were ready for the voyage. Just after lunch on Thursday, December 8th we headed out the Port Everglades channel into the Atlantic Ocean.

Topping off the 400 gallon diesel tanks in Fort Lauderdale. 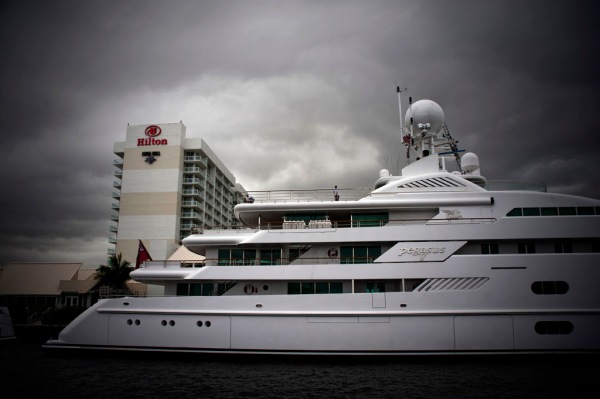 As Shrek once said, "Do you think he's maybe compensating for something?" 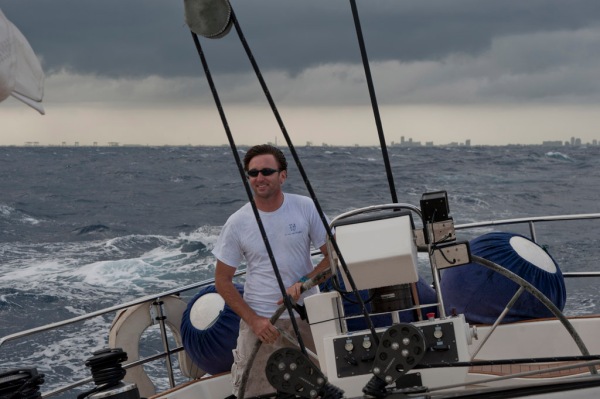 Nicolas happy to have the congestion of Fort Lauderdale behind us.

For the first time in almost 15 years I was headed to sea. Words can only begin to describe how natural yet exhilarating this felt. There’s no greater sensation of being alive than to be aboard a small sailboat with her bow aimed at the open ocean while knowing it will be many sunrises ’til you see land again. Within half-an-hour we were beating through the gulf stream in 8-12 foot seas, close hauled with a 15-20 knot north-easterly breeze. Though the waves were confused and the motion chaotic, the sailing was fantastic. And as in the beginning of all good passages on fine vessels, there was no shortage of things breaking, leaking, chafing, etc.

Charging into the Gulf Stream under full jib and double reefed main.

Besides coming in most of the hatches, water was mysteriously streaming out of one of the ceiling panels over the saloon table. After some dissasembly Nicolas and I traced the leak to an electrical connection for one of the hydraulic winch switches on the foredeck. While Nicolas taped and caulked the leak on the inside, I rebuilt the exterior portion of the switch. This may have been the coolest 10 minutes of my 2011. Flying through the gulf stream at nine knots while hundreds of gallons of water crashed over the deck with every wave, bracing myself between shrouds and the boom vang with tools in hand, holding spare parts and miniature screws in my teeth. Yes, that was awesome.

Nicolas vs. the incoming ocean.

The deck should be clean after that one.

Night was soon to fall after an amazing ocean sunset. The seas calmed a bit once past the Gulf Stream and with a steady wind we tacked our way through the shallow waters of the Bahamas. And thus began my near-nightly routine of trying to capture on film the sensation of being at home on a moon-lit ocean. 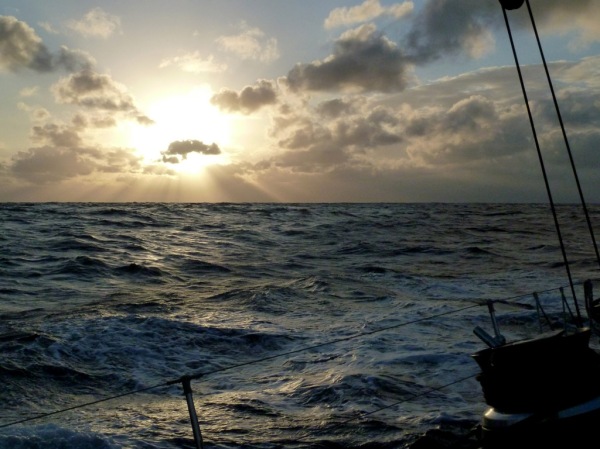 Great sailing continued into the next day. Besides catching a glimpse of Great Abaco Island and a ship or two we were otherwise alone. In between watches there was ample time to cook, nap, read, or practice celestial navigation with a sextant.

Great Abaco Island far to the north of us.

Taking a nap on the boom.

Peering up at one great looking single reefed main.

The clew of the main under considerable load. 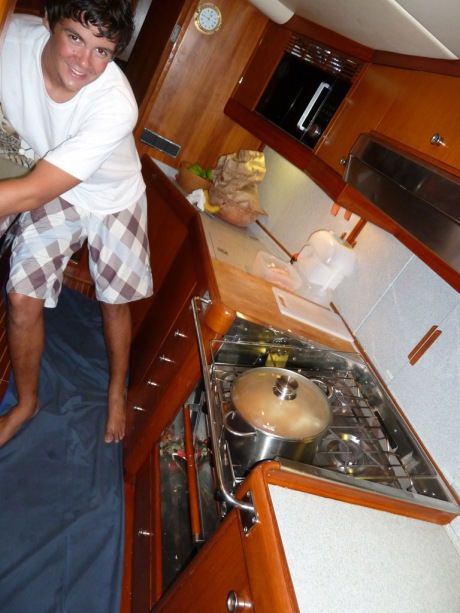 Santiago cooking pasta in the galley.

Cooking a little something I like to call "Starboard Tack Quiche" 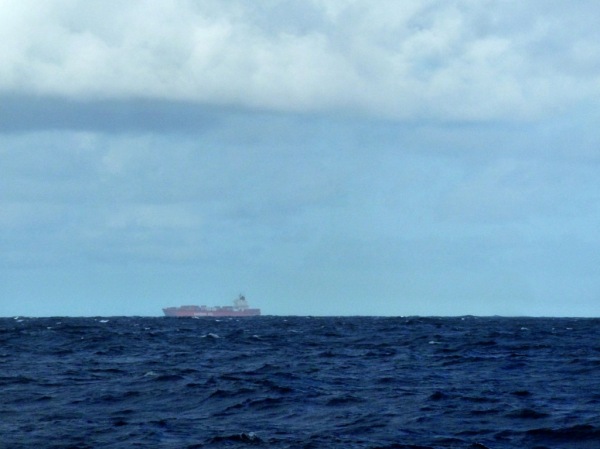 A container ship in the distance. 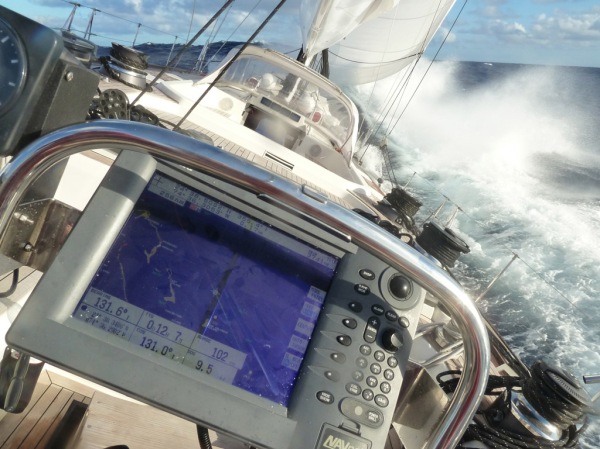 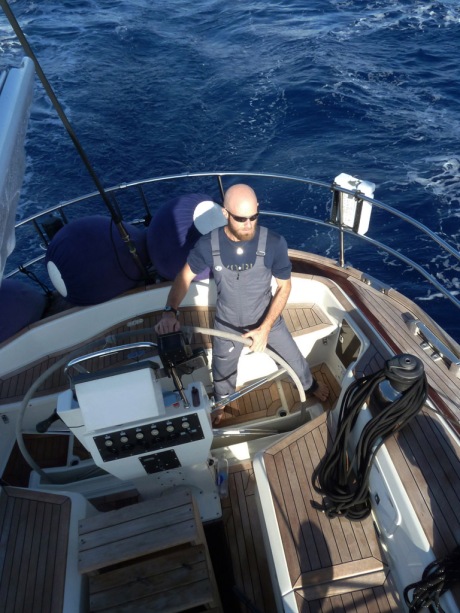 There's nothing like steering the perfectly balanced helm of a beautifully trimmed 60 ton vessel through blue water at 9-10 knots. 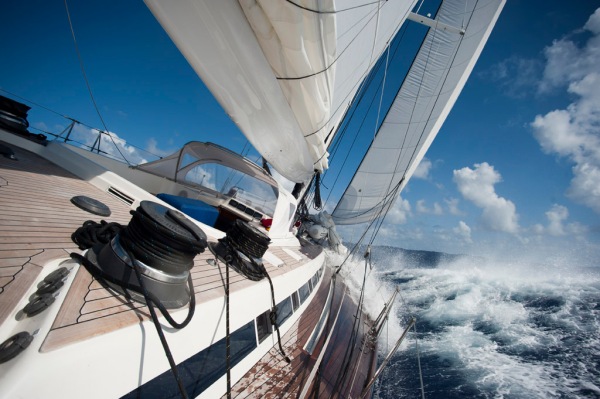 Rail in the water. 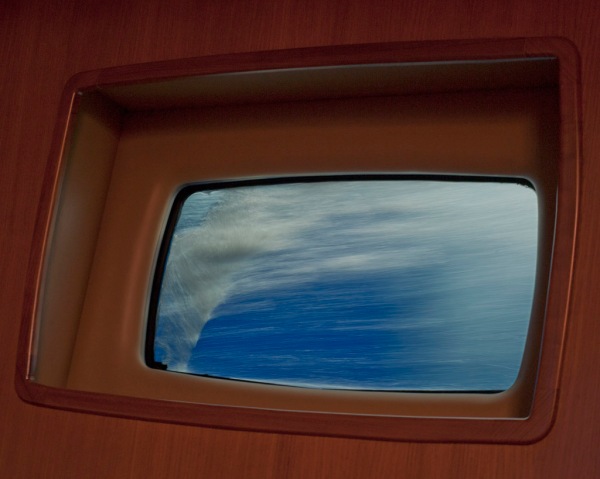 Watching the ocean speed past through a portlight that's usually several feet above the waterline.

Staying dry behind the dodger.

Santiago and Gary on watch.

A pillow fort built in an attempt to get some rest after watch. 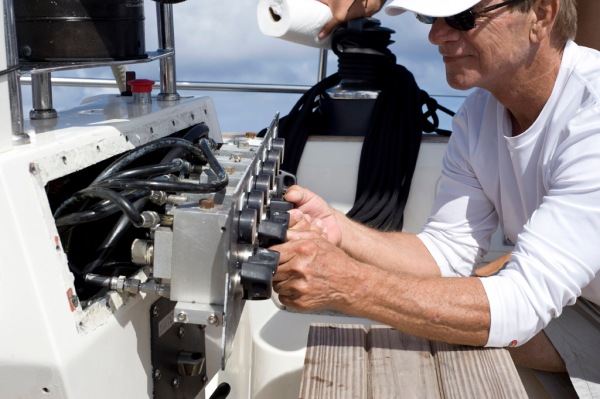 Gary and Santiago sail on as the sun begins to set.

We were blessed to have timed our passage not only during excellent weather but also a full moon. Each night the setting sun left us immersed in absolute darkness for several hours. For these few hours the number of shining stars above was absolutely stunning, as if the sky was trying to compete with the ocean and its phosphorescent light show. Then shortly before midnight the full moon would rise over the bow and secretly introduce a second day, illuminating the waves, clouds, and our little boat like some cool cobalt dream. Flying through the waves in deafening silence, the feeling of immersion and oneness with this vibrant, pulsating, and chaotically orchestrated planet was overpowering. 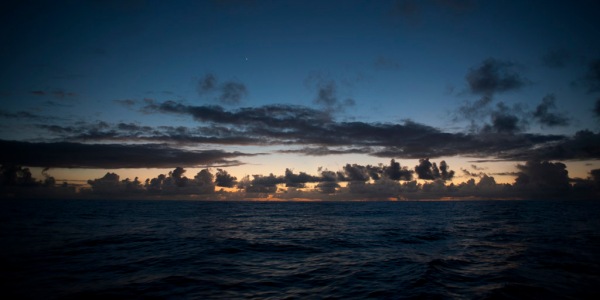 Looking toward the 100' high masthead as La Forza rocks beneath the night sky. (30 second exposure) 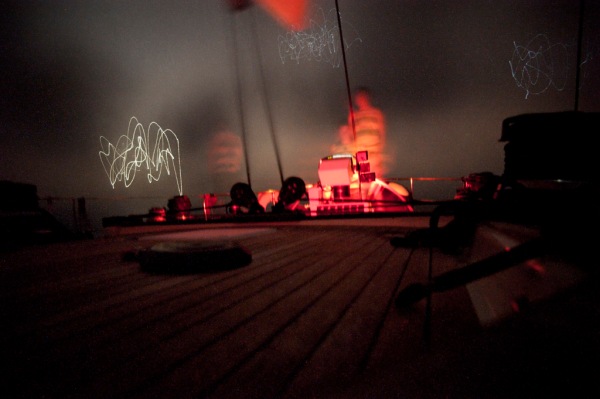 Santiago on watch (while the ghost of Santiago takes a leak off the stern) with dancing stars behind. (120 second exposure) 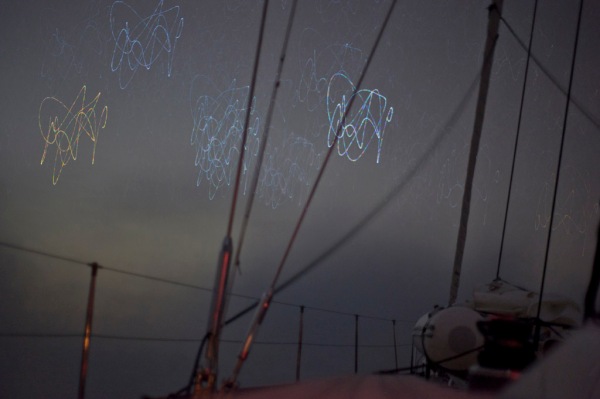 Looking forward toward the faint glow of the approaching moon. (30 second exposure) 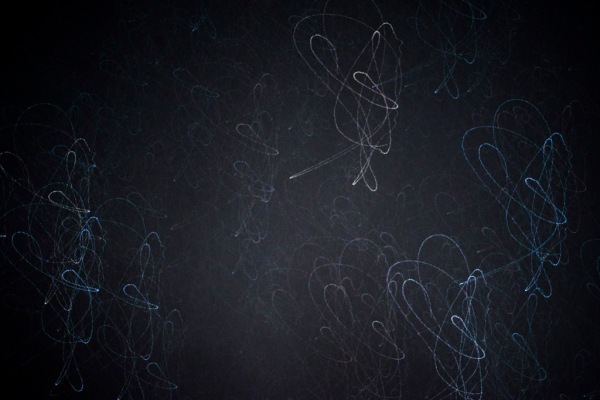 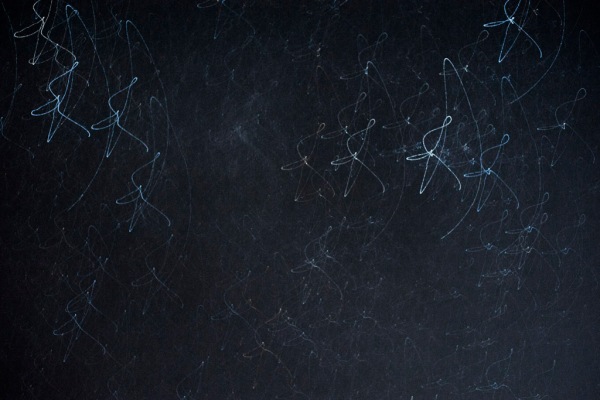 The moon from a rolling sea. (Composite of 1 second through 301 second exposures)

Sunrise brought calmer seas and what would become very light air. Soon we had to fire up the iron jenny and begin entertaining ourselves through the monotony of the doldrums. 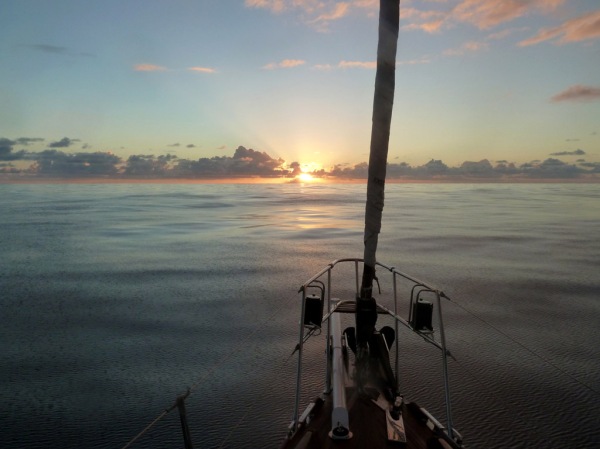 Big swells on a calm sea. 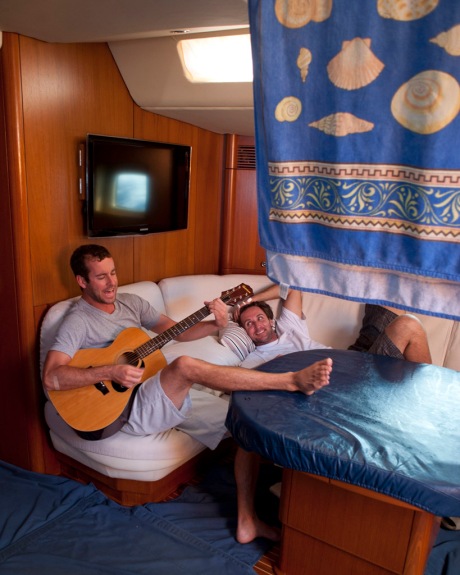 For Gary entertainment took the form of fishing. For Wes it was playing the guitar. For me it was trying to photograph flying fish, or as I not-so-affectionately began calling them, “Those elusive little bastards!” After an hour of lying commando style on deck with the camera poised at eye level I hadn’t seen a single fish. Discouraged, I went below. Not a minute later Santiago called down the hatch, “Ryan, we’re in a school of fish now!” I bounded up the companionway and took my position, only to find that the wave of fish had passed and my viewfinder was again fishless. This happened several more times over the next few hours, each time I’d go below Santiago would call some version of “Ryan, your little bastard friends are back and they’re laughing at you! Now’s your chance!” Finally with a healthy sunburn and hundreds of out-of-focus pictures of waves where fish had been moments before I had amassed a small collection of decent photos.

Coming in for landing.

After 6 days at sea and 1200 miles under our keel we made landfall on Sint Maarten. Five of those days were in awesome sailing conditions and La Forza’s performance was truly fantastic. Quantitatively our averaging 200 mile days (almost 8.5 knots) while sailing hard into the wind is impressive. But qualitatively there is the “how” those 1200 miles were sailed. Her sheer balance of power, finesse, speed, confidence, and stability is a sure testament to this 20 year old German Frers design, of which La Forza is hull #1.

Nearing Sint Maarten was not only a geographical milestone, but also a psychological turning point. Bittersweet it is to know that tonight in place of a peaceful, moon-lit nightwatch there will be the lights and delights of civilization.

Sint Maarten on the horizon. 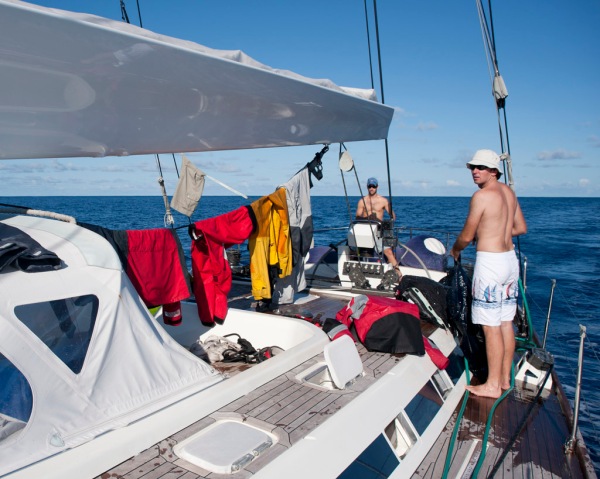 Washing and drying a week's worth of salty foul weather gear.

The island of Saba in the distance, a Shangri-La my folks and I were lucky enough to anchor at and go ashore for a day 16 years ago.

Gary dressed for a night out on the town. 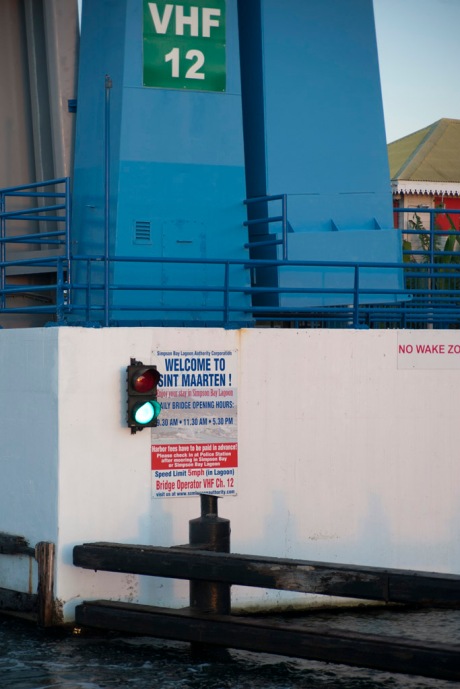 Passing through the drawbridge into Simpson Bay Lagoon. 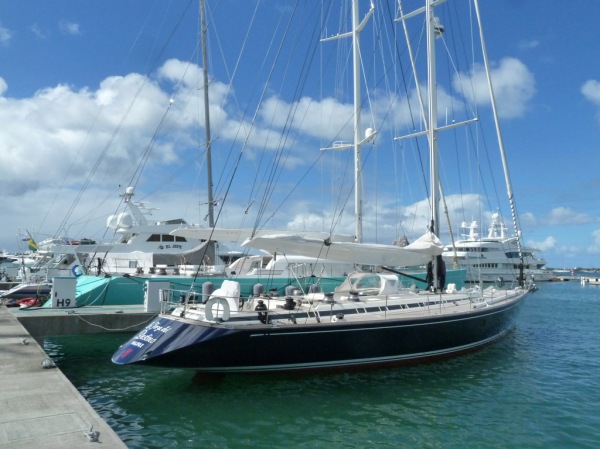 The next several days and nights were spent rehabbing La Forza and the crew which included much debauchery at island bars and sightseeing around the island. Soon I would be boarding a plane back to a wintery family Christmas in Idaho. 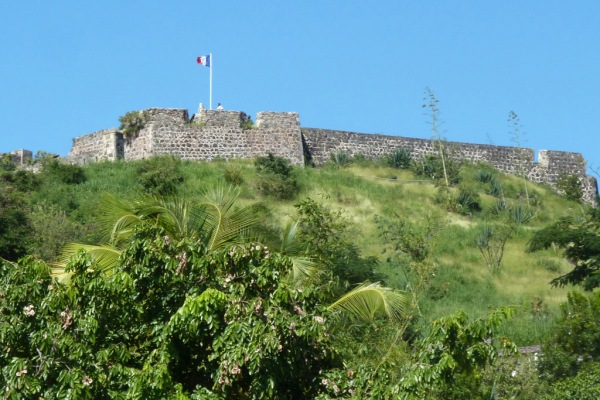 A fort on the French side of St. Martin. 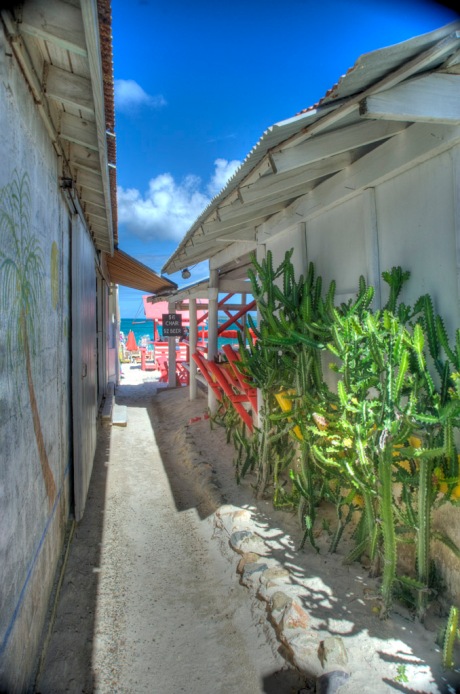 Heading to the beach. - HDR

Beach on the south-east coast.

Gallery | This entry was posted in Good Times, Ride Report. Bookmark the permalink.