I mentioned some catching up to do in the last post, indeed October was quite the month! Boat work with my folks, the purchase of some pretty sweet metalworking equipment, and a road trip with my sister and cousin around New England.

Most engines like to be run occasionally and Northern Cross’s diesel is no exception. The trick was to make the engine think the boat was in the water, so with a hose hooked up instead of the seawater pump and all the connections as Dad remembered they should be, we turned the key. The trusty Perkins 4154 fired right up, not surprising but still a relief as it had been a few years since my folks last ran it.

Dad making adjustments as the engine fires away. 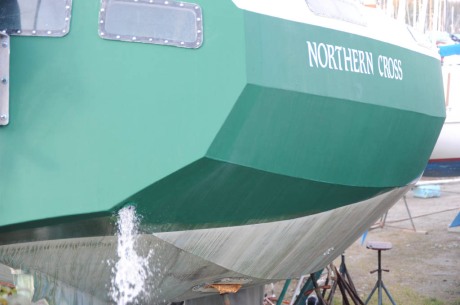 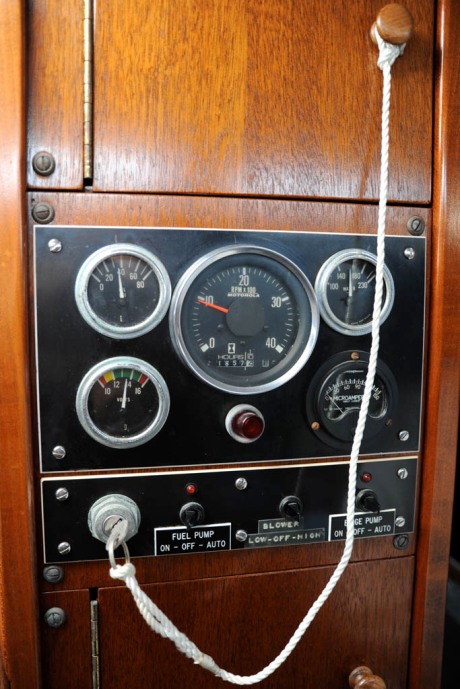 The sweet cacophony of pistons chugging away at 1000 RPM brings back memories of many a passage through doldrums.

Fiberglass insulation removed to reveal a rusted but intact exhaust manifold. Add that to the winter projects list.

On Mom’s list of canvas projects to repair or create anew was a windlass cover. Quick work for someone who used this same space to make entire sails years ago. 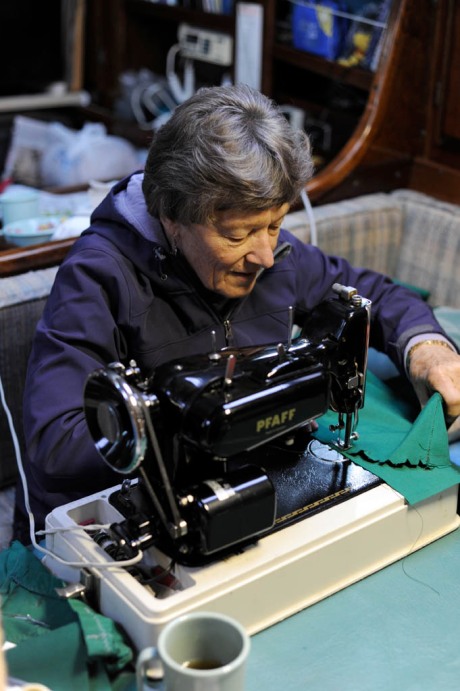 Our trusty Pfaff 130, 50 years old and still a veritable legend in the industrial sewing world. Canvas - no problem. A dozen layers of sail cloth, leather, and webbing 3/8" thick - bring it on!

When I was 8 years old Dad and I spent quite some time in a friend’s basement machine shop working on boat stuff. I can still remember one project as if it were yesterday, turning anchor rollers on a metal lathe using scrap titanium recycled from the junkyard. Ever since then I have wanted a metal lathe of my own. Fast forward 20 years and a Maine Craiglist posting and I finally got my wish – a Sears / Atlas model from the 1950’s, with a 6″ swing and 18″ bed in beautiful showroom condition. I built a worktable for it and was soon hoisting it aboard, slipping it with barely a quarter inch to spare down the V-berth hatch. In a way this was a return to the boat’s past, for when we purchased her in 1989 the V-berth was a workshop. But my parents thought I needed a place of my so out went the dirty shop and in came a cozy cabin.

The lathe's new worktable in progress.

Lifting over 200 pounds is kid's stuff when you've got an entire sailing rig at your disposable. 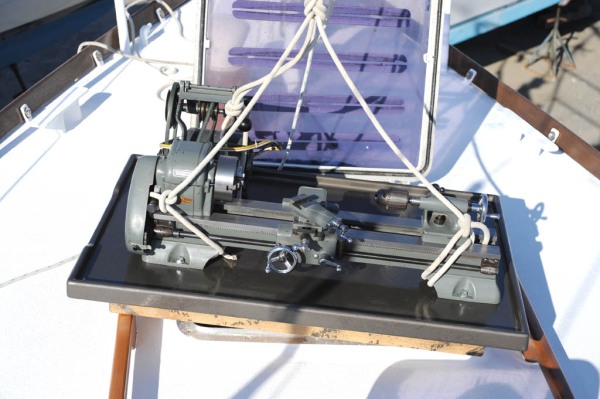 The lathe and worktable at rest before going down the hatch. 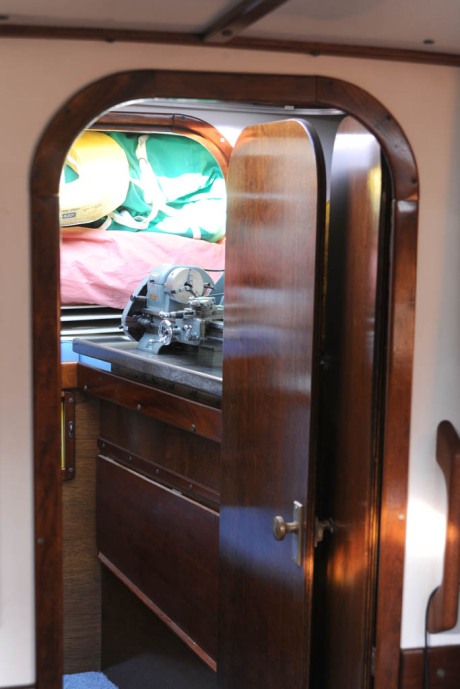 Looking forward from the main saloon into the boat's new machine shop.

The weekend before my folks left we had somewhat of a family reunion with a gathering of a few of the dear friends who had all built steel sailboats alongside ours back in the day. To have gone through shared building experiences, cruised abroad, and even taken shelter from hurricanes together makes for life long friendships.

A get together like old times with Mom, Dad, Mike, Carrie, John and Shirley.

By then it was time for what is becoming an annual event, an adventure with my sister Taryn and cousin Kelli. I was thrilled to have Taryn spend the first several days of her visit in Rockland as she had never seen the boat before. I think she was thoroughly hooked and is now itching to go sailing as much as I am!

Taryn and I in Rockport waving for my nephew Gage who is quite the train fan. 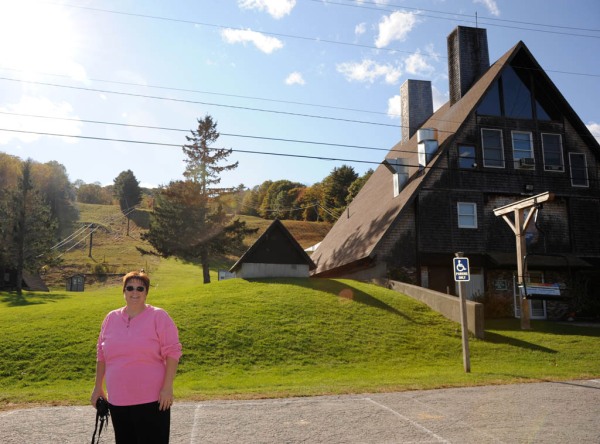 Visiting Camden Snow Bowl, not quite as much snow here as in my last post! 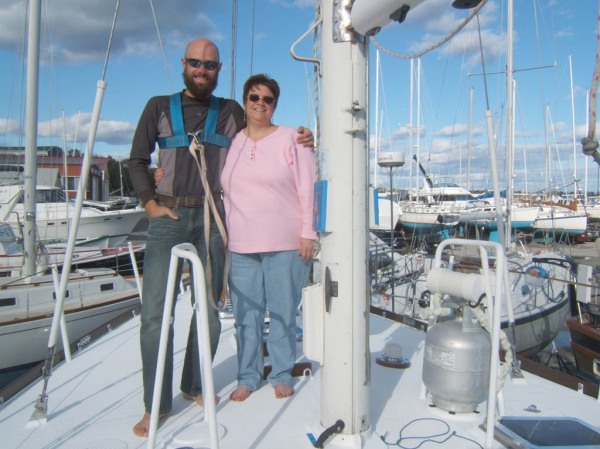 Happy to be back on deck alive after Taryn hoisted me up the mast to take measurements for new sails. 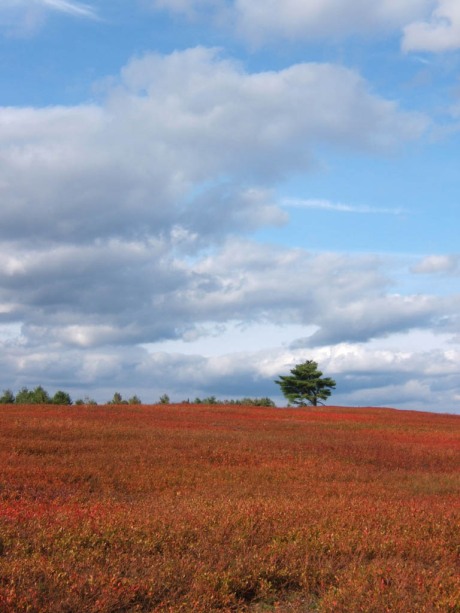 Fall colors and blueberry bushes on one of my favorite coastal drives: Appleton Hill Road. 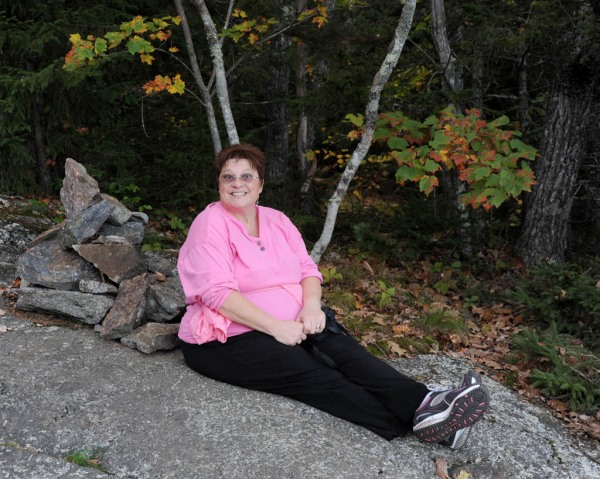 Taryn's definition of "smiling at the camera" while hiking in Camden Hills State Park.

Next we met up with our cousin Kelli in New Hampshire to start a week long road trip that would take us around Boston, the White Mountains in New Hampshire, various Vermont destinations, and Montreal.

Taryn and Kelli trying to no avail to get me a date in Salem, MA. Can you believe the witch said "no"!? 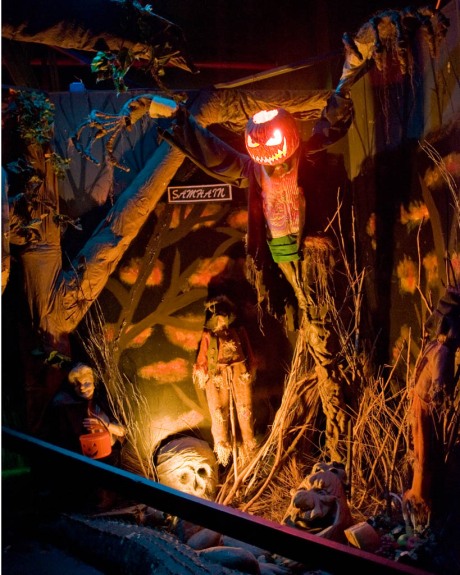 One of the many Halloween themed exhibits in Salem, MA

A calm twilight on the Salem waterfront.

In memory of all the innocent witches burned or hung in Salem back before witches were cool.

Thankfully by this point my dear sister and cousin had given up on finding me a date and left this poor decrepit candidate alone, though she did have a beautiful smile.

Quite a nice family portrait don't you think?

A monument to one of the sweeter witches in history. 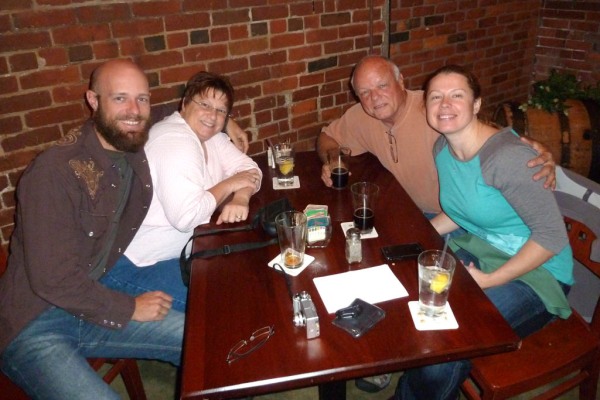 Enjoying dinner with Uncle Joe at restaurant stop 1 of 3 for the night.

Finding our way along the Boston Freedom Trail.

Taryn and Kelli waiting for a Boston ferry.

Next we were off to New Hampshire for a few great, relaxing days with Aunt Marge and Charles. First stop: the local Irish pub. 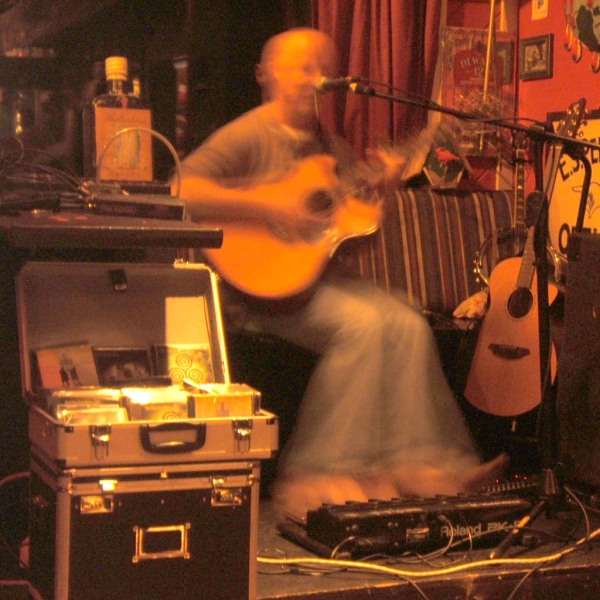 Davey Armstrong of "Four Feet Two Shoes" playing the harmonica, guitar, and foot organ all at the same time. 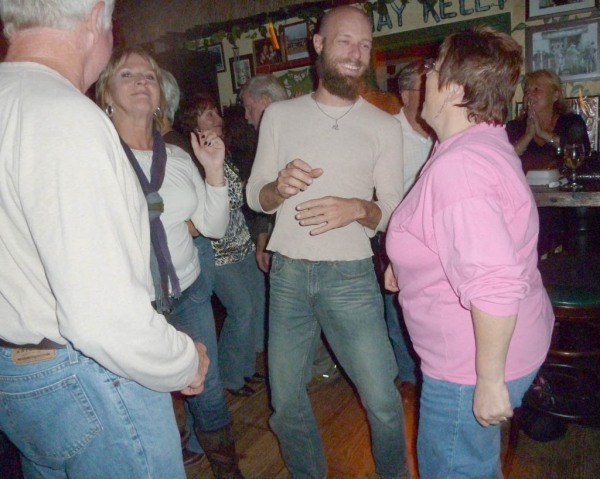 Dancing a jig with Taryn, Aunt Marge and Charles while Taryn laughs at my lack of coordination.

Hiking to Diana's Baths with Aunt Marge, Charles, Taryn, and Kelli the next morning. Five people, five coffees, coincidence? I think not.

Off to Vermont we went to visit my cousin Joe and his wife Diana and then to Montreal. 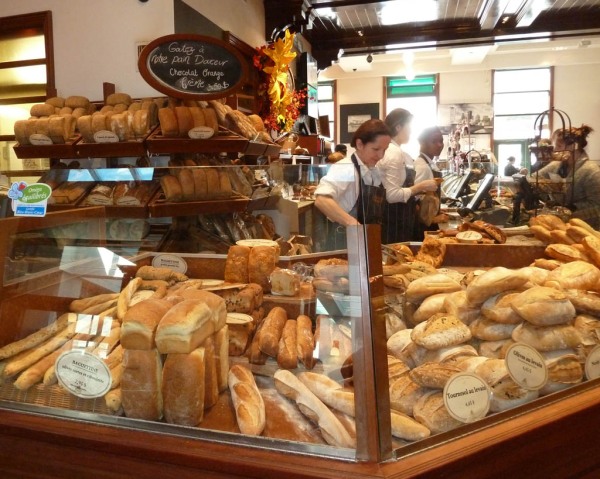 A breakfast of French pastries at the Jean-Talon Market.

Joe, Taryn, and Kelli after a beautiful fall stroll to the top of Mont-Royal. 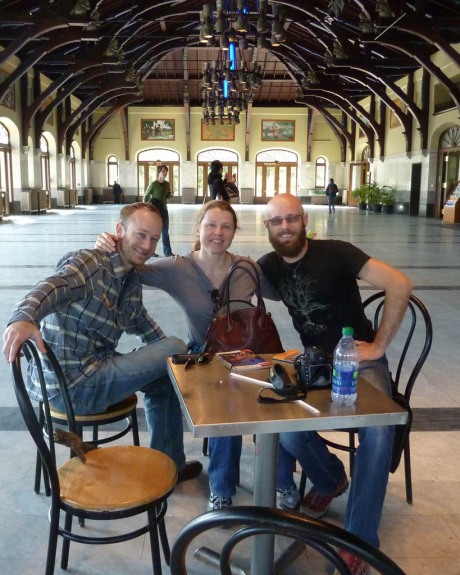 Joe, Kelli and I in the Mont-Royal lodge at the summit.

This year’s road trip reinforced several key themes from last year’s trip (which was based in DC). 1) The three of us are quite relentless at ruthlessly harassing one another, nothing, it seems, is sacred, and your ally one moment will likely throw you to the wolves with an outburst of laughter the next. 2) Taryn and Kelli are awesomely up for any adventure at any time (as long as it’s not before noon), and 3) We won’t pass up any chance for ice cream, ever. So naturally the Ben & Jerry’s factory in Vermont was not to be missed.

Taryn and Kelli playing the parts of Ben and Jerry.

QA at the ice cream factory, where do we sign up for this job!?!?!

I suppose that was the proverbial parting shot. Don’t think there’s a happier one in the set really, it’s hard to beat eating ice cream in a cemetery with my sister!

This entry was posted in Uncategorized. Bookmark the permalink.