After relaxing in Idaho for a month longer than planned, it was finally time to leave and head for an international border. With an awesome new compass from my sister (“Thought you needed a little direction!” she said) mounted in the cockpit and a working water pump, it was time to hit the road. The only problem was, it seemed someone had stolen the Camel! 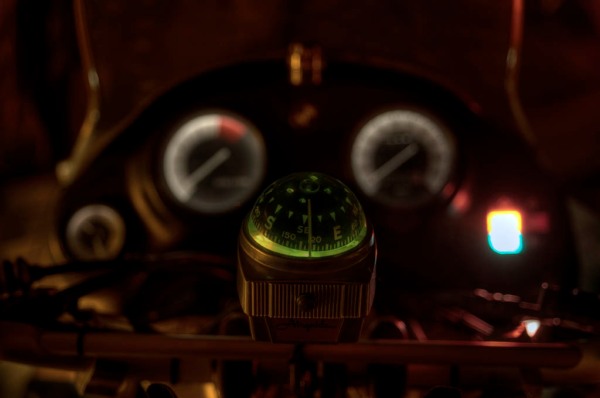 A few stops on the way out of Idaho included a final camping trip with my nephew Cage for his 9th birthday and a few days at the St. Clair Family Cabin for the annual work party. This year’s chore: rebuilding the 30 year-old deck after damaging winter snow loads.

Like a family reunion that includes demolition and carpentry (OK, and a few dozen games of cribbage!) (Photo by Ann Margaret)

Heading into Wyoming it was time for a quick passage through Yellowstone National Park en route to Beartooth Pass, one of the highest highways in the continental US at 10,947′ elevation . Only recently cleared of its winter snow cover the scenery was simply stunning, and the hundreds of exposed switchbacks were thoroughly enjoyed on two wheels (see video below, unless you’re Mom in which case you should just scroll past it). The Camel must have been pretty excited too because even in the thin evening air at close to 11,000′ there was plenty of getup in her go. 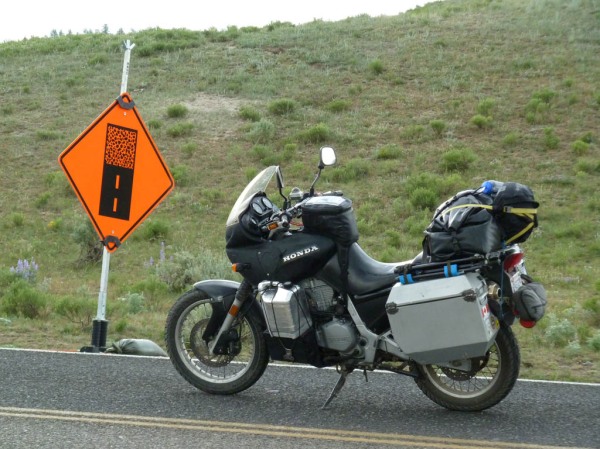 Pilot and Index Peaks in the Beartooths.

An hour of hairpin curves and glaciers condensed into a 5 minute video. This is for you Dave:

The Zortman BLM Fire Station in Montana where my buddy Glen used to fight fire out of.

The next day we headed north through central and eastern Montana to visit Andy, home in Glasgow, MT from doctor school for the summer. It had been some years since I’d seen Andy, even longer since I’d seen his parents John and Mary or his sister Tess, and it was my first time meeting his girlfriend Natalie and her dog Leo. With such a group of people my one night visit turned into two, then three, and could have easily turned into the rest of summer considering all the fun we had.

Cooling off in the evening with Andy and Natalie in one of the Fort Peck Dam dredge cuts.

Andy’s family farm suffered heavily during the spring flooding, with hundreds of acres spending nearly two months under several feet of water. The flood left broken fences, a littering of driftwood (thousands of branches and entire tree trunks), and inches of “gumbo”, a mud turned Death Valley-like clay that seeds can’t take root in. For me this meant several awesome days of working on the farm – driving the tractor, moving logs, and building fence. Fun work with the company of the Fahlgrens, but certainly eye-opening as to what goes on in the agricultural world behind the handy grocery store fronts we blindly take for granted.

Andy about to give me tractor driver's ed. (Photo by Natalie)

Fence ruined from the flood.

Tree trunks and "gumbo" mud left by the flood on once fertile cropland. - HDR

Andy, Natalie, Leo, and I driving out to the Vandalia pasture to build fence. 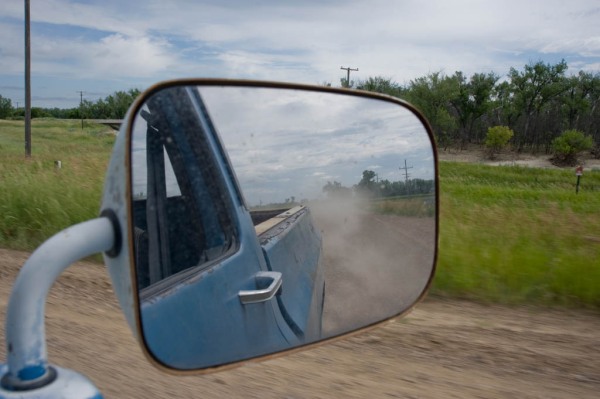 Leo contemplating the things dogs contemplate when riding in the bed of a pickup truck.

The Vandalia pasture, a thousand acres of rolling, badlands buffet for the cows.

This is one nice looking fence. A really, really fine piece of work. Damn near a work of art I'd say!

Andy and Natalie looking all romantic at the Vandalie school house.

Same school house, this time with some grasses or something.

Each evening storm cells came through, bringing with them wind, torrential rains, and very erie looking skies. No better end to a day of real work than sitting on a porch with good friends, a cold beer, fine cigars, and entertainment by mother nature.

Poor Leo was not too fond of the thunder and lightening.

Family away from home.

While there we visited the Fort Peck Dam, the largest hydraulically filled earthen dam in the US. Built in the late 1930s by Roosevelt’s Public Works Administration, it now holds back the Missouri river in Fort Peck Reservoir, which boasts more miles of shoreline than California. Due to the spring flooding the spillway was open, a rare sight as it’s only been opened three other times in the last 70 years. The flat, streamlined rush of water 800 ft wide, a mile long, and flowing at 65 miles an hour was somehow unnerving in its calm and collected energy. More like an alien conveyor belt of cool turquoise lava than any turbulent river on earth. Andy and I later took a tour of the powerhouses (where cameras were not allowed), seeing the massive shock tanks and even touching the spinning 36″ diameter shafts connecting the turbines and generators, which put out a total of 185 MW. While in the area we also visited the Fort Peck Theatre, famous for its history and productions, which draws huge audiences despite its remote Glagow location.

The shock towers above the generating stations of Fort Peck Dam.

The Fort Peck spillway, in use for only the fourth time in 70 years. 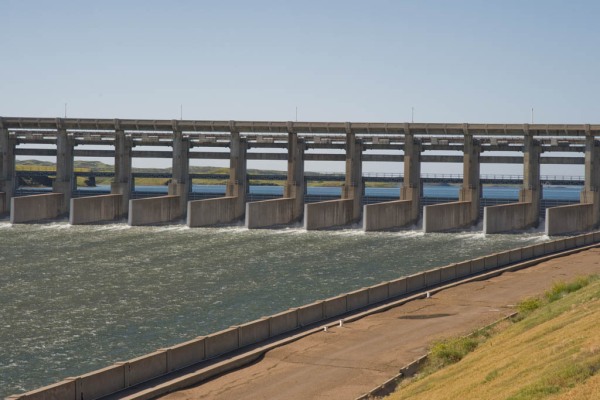 The Fort Peck spillway. Would be one hell of a kayak ride until you got to the bottom. - HDR

The Fort Peck Theatre preparing for a production of Chicago.

It’s never easy to leave a place like the Fahlgren’s where the surroundings feels like home and the friends around you like immediate family, but there was an international border to cross! With a “Goodbye Ryan Cargo!” from Andy and waves from his family in the rear view mirror, the Camel and I were off again. Soon I was in a foreign land after a fairly painless border crossing. I know, I know, it’s the wrong border, I’m supposed to be going south – as my buddy Bryo put it on the phone last night, “How’s the trip going? Wait, Canada? What? Bro I think you need to get your compass looked at!” But, it seemed like a good direction to head and I have a destination in mind that warrants such a route, so why not!? 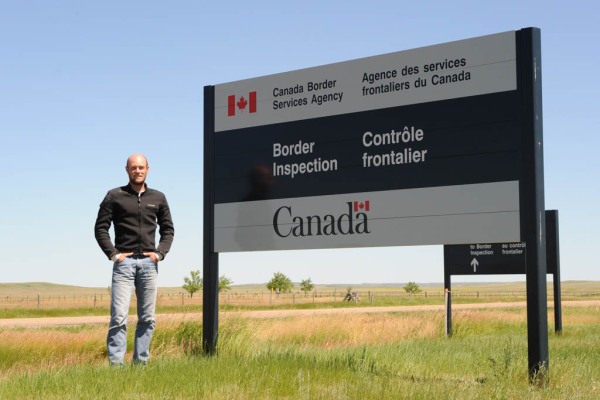 Finally, a need for my passport!

I think this is pretty cool.

So there I was – Saskatchewan, Canada! With the canola fields in full bloom it was a peaceful summer day to ride north. Then they were upon me, squadrons of a million bat sized dragonflies, hovering in military like formation at eye-level above the road around every corner! Holding their positions as I approached and confident in their air-superiority, they were slow to realize that the Camel, though earth-bound, was a mite bit bigger than they were and was not about to back down. At the last moment they darted one way and then another, most missing the Camel and I by mere inches, but many sadly meeting a tragic end upon the headlight. Looking up at the blinding sun, a faint reflection of my face visible in the helmet visor, speeding though fields of phosphorescent greens and yellows with these strange flying creatures all about, I couldn’t help but feel we’re all astronauts here on this planet we call Earth. This tiny ball of rock we call home too often feels spent and mundane to so many people, but she can still surprise and delight if we give her the chance. 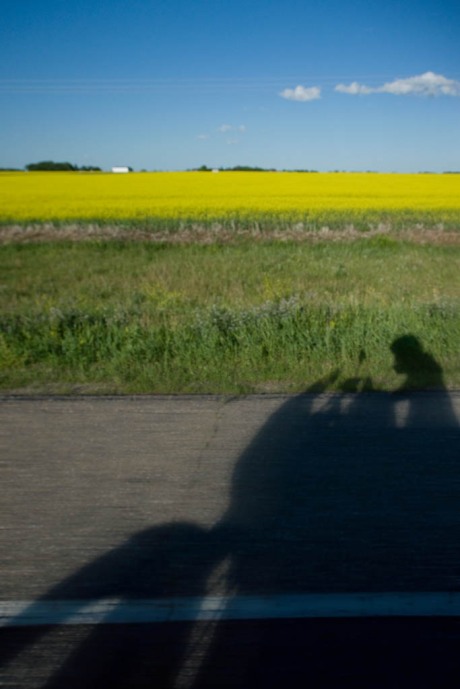 Riding through a sea of canola fields. 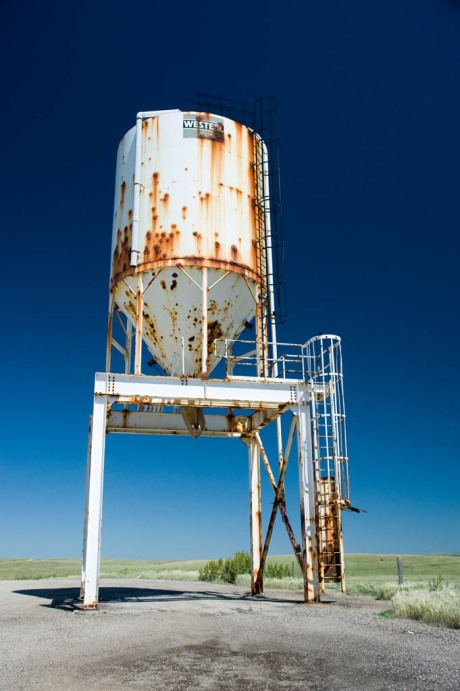 An abandoned structure like this demands to be photographed, and if sufficiently weakened by rust, to be climbed on. 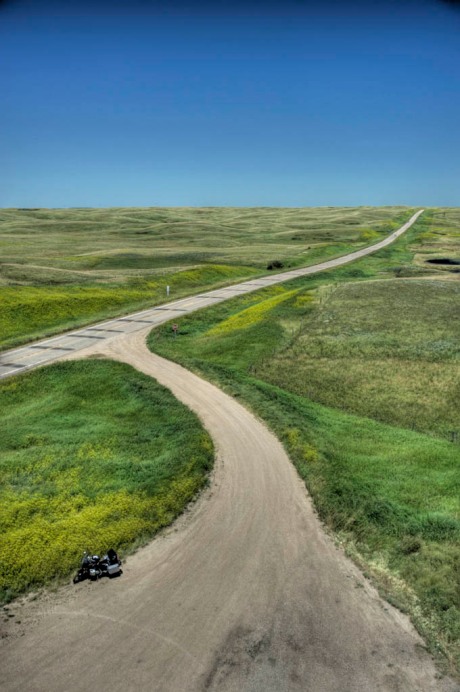 Saskatchewan, taken from atop the structure in the previous picture. - HDR

The driver of this fertilizer tractor noticed me taking pictures and while waving hello, made a special trip to the near side of the plot for me to get this shot. Thanks tractor driver!

Weighing the Camel. 300 kg / 660 lbs = not great news. That's 50% over stock weight and puts it close to absolute maximum capacity with me aboard. Perhaps I shouldn't have fabricated so many of the accessories out of steel!

The evening’s destination was the Ness Creek Music Festival near Big River, SK. A gathering of nearly 5,000 people for four days of music, it’s been happening here 20 miles from any paved roads every July for 21 years. After setting up camp I walked toward the music and danced under the full moon until well after the sun came up at 5AM.

The band Library Voices performing on the main stage.

Jeans Boots performing in the after hours tent before Gobble Gobble, a band that proceeded to layer the sound of turntable trance with the drumbeat of smashing shovels and hockey helmets until dawn. Awesome!

Though I had intended to stay at Ness Creek the full four days and so far it had been a riotously good time, I was itching to put some miles behind me and find a little Canadian solitude. I packed up camp and was soon headed east toward Manitoba. Just a few miles into the province and a few minutes before sunset I spotted an enticing creek. Steering the Camel off the highway and into the wilderness I motored upstream a quarter mile or so and found the perfect camp. Perfect in appearance isn’t everything though, as I soon realized my night was to be shared with the worst swarm of biting insects I’ve ever experienced. A hot, humid, buggy night made it pretty easy to get on the road shortly after 5 AM the next morning for a long day through Manitoba and Ontario, to be continued…..

A picture is worth a thousand mosquito bites. Actually, I'm not sure if it is really worth it. Camping on the Rice River in Manitoba. - HDR

Gallery | This entry was posted in Uncategorized. Bookmark the permalink.