Saturday morning, April 23rd – Despite a bit of rain, the camel is finally packed (over loaded in fact) and it’s time to say goodbye to 6607 100th Ave and my wonderful roommates for the last year and a half: Brian, Kristin, Freddy, Luis, Joe, Eve and Biko. I’ll miss you guys!

Did I mention overloaded? Barely 20 miles into the journey it was obvious that the sheer amount of crap I had loaded was too much, between windage and steering like a drunkin sailor, something had to be done. A quick stop at a FedEx in Virginia and some repacking on the sidewalk got 35 pounds off the bike and on its way to Idaho.

Do I really need this?

After a pleasant drive I arrived in North Carolina to visit dear friends Ed, Ellie, and Finnegan. Proud owners of a “new” restored 1964 Citroen 2CV (also known as a “deux chevaux”) named Madeleine, Ed was eager to take me for a ride in the country. They just don’t make cars like the used to, one mile down the road and I felt like I was driving through the French countryside in another era. 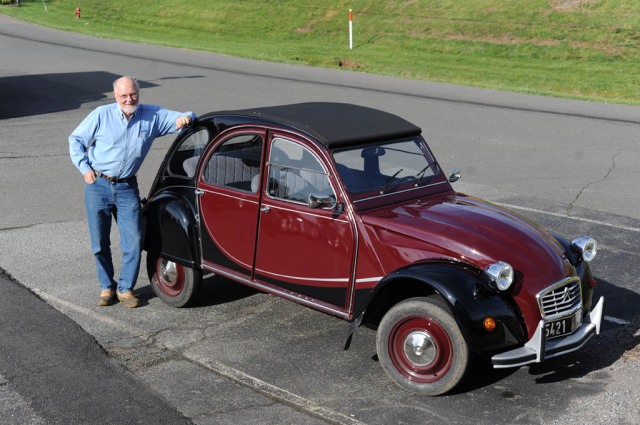 Ed & Ellie, who lead possibly the busiest and most exuberant retired life of anyone I know, are very involved in the Florence Thomas Art School (Ed is president of the board in fact) in nearby Glendale Springs, NC. Last October I toured the school, an awesome campus nestled up to the Blue Ridge Parkway, which offers over 50 workshops each year. Ed asked if the camel and I would join their International Marketing Team – we would be honored:

On down the road in Chattanooga, TN I learned that this was the birthplace of the tow truck. And to commemorate such a historical event, was the International Towing and Recovery Hall of Fame and Museum. 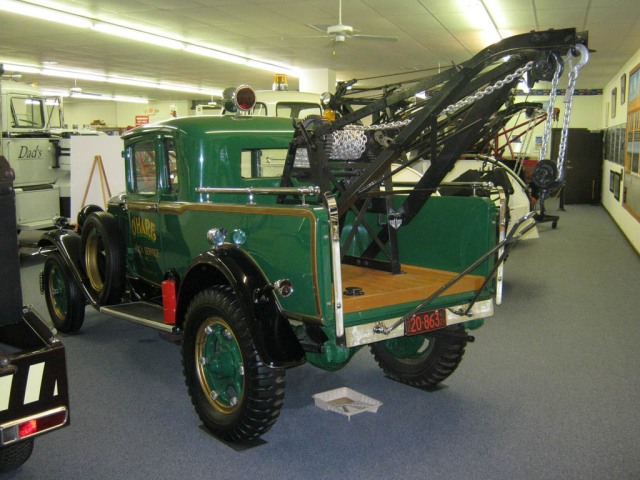 Another few states and I arrived in Mississippi, which graced me with what seemed like several inches of rain overnight, leaving my tent floating and requiring extensive drying out the next morning in the campground laundry room. This followed by a dead battery, tipped over bike, broken redneck highway pegs, and ultimately getting on the road that day after 1 in the afternoon.

The weather wasn’t on my side yet though, later that day through Texas my intended route was shared by some industrious thunderheads and tornadoes. One gas station clerk commented that the tornado the day before had torn the building’s sign off right in front of her eyes. “Figured the good Lord had a mind to take me right then,” she said, followed by this encouraging comment, “But I’m still here, so maybe he’ll take me today as we’re ‘spectin the same weather this afternoon.” Not 20 miles down the road the weather turned so ominous that I took cover under a bridge for an hour to let it pass.

The same sky that took Dorothy to Oz 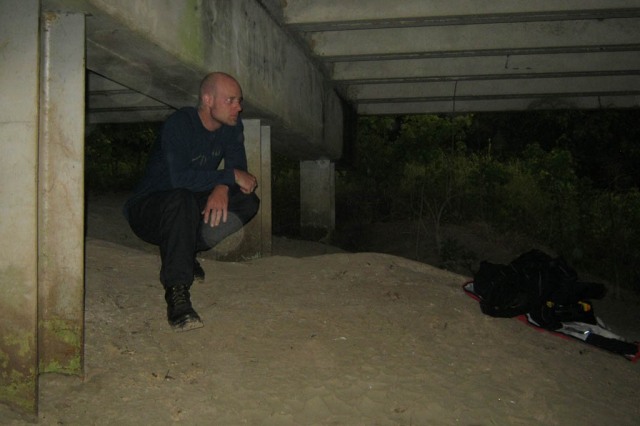 Eventually the weather improved, the boredom of the mid-west was past, and the sun rose over a clear desert horizon, seen in all its glory from within a dry, cozy tent in New Mexico.

Tempting as the sunny day was, I instead spent nearly 8 hours exploring the underground wonderland of Carlsbad Caverns National Park. Ansel Adams described Carlsbad Caverns as “…something that should not exist in relation to human beings. Something that is as remote as the galaxy, incomprehensible as a nightmare, and beautiful in spite of everything.” I couldn’t agree more. 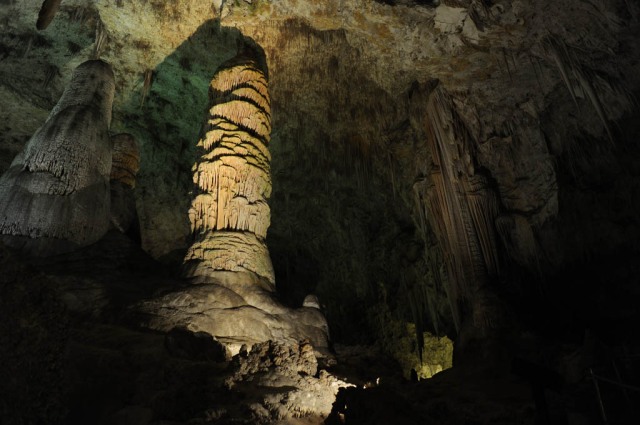 60 ft tall cave formation in the Hall of Giants 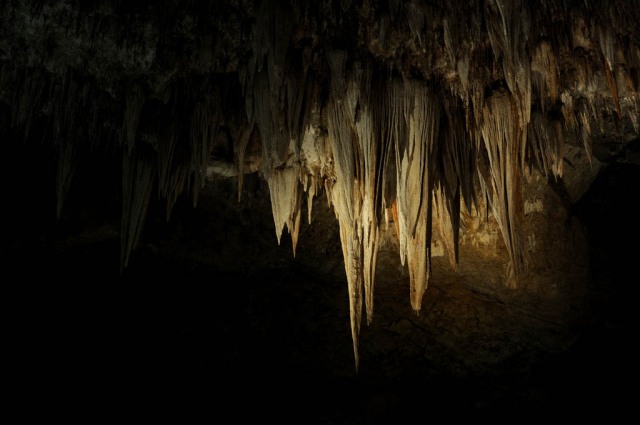 Stalactites hanging nearly 10 ft down from the ceiling 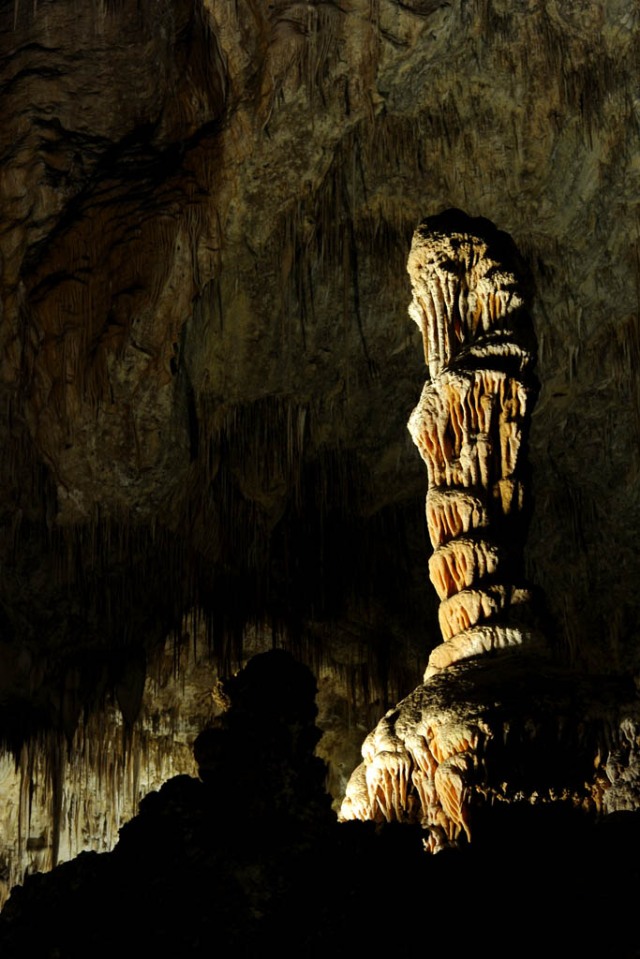 Note the 747 airplane shown for scale 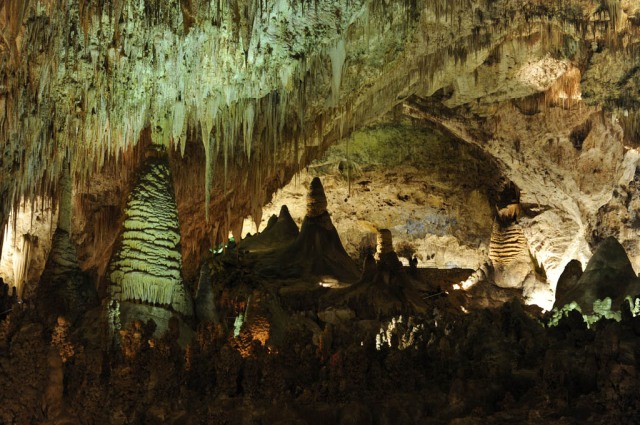 Note the silhouette of the person standing just right of center

After much of the day hiking the self guided trails, I joined a two hour ranger-led tour of some of the cave’s remote areas.

Wiggling our way back to daylight

Back on the road, riding into the sunset on day 6 of the journey, it finally hit me – I was free at last, out on the open road with the entire world before me. I can’t put into words the feeling of elation I felt, I was fairly singing in my helmet and dancing on the camel’s footpegs with tears of joy streaming down my cheeks for a good hour while speeding through the grandeur of the southwest.

What could possibly top such an afternoon? Camping under a night sky untainted by light pollution, silent but for the whisper of interstate traffic in the distance.

Home on the road

Gallery | This entry was posted in Place Report, Ride Report. Bookmark the permalink.